Tony Gwynn Jr. Event is a Homerun for HES Solar and YMCA Partnership 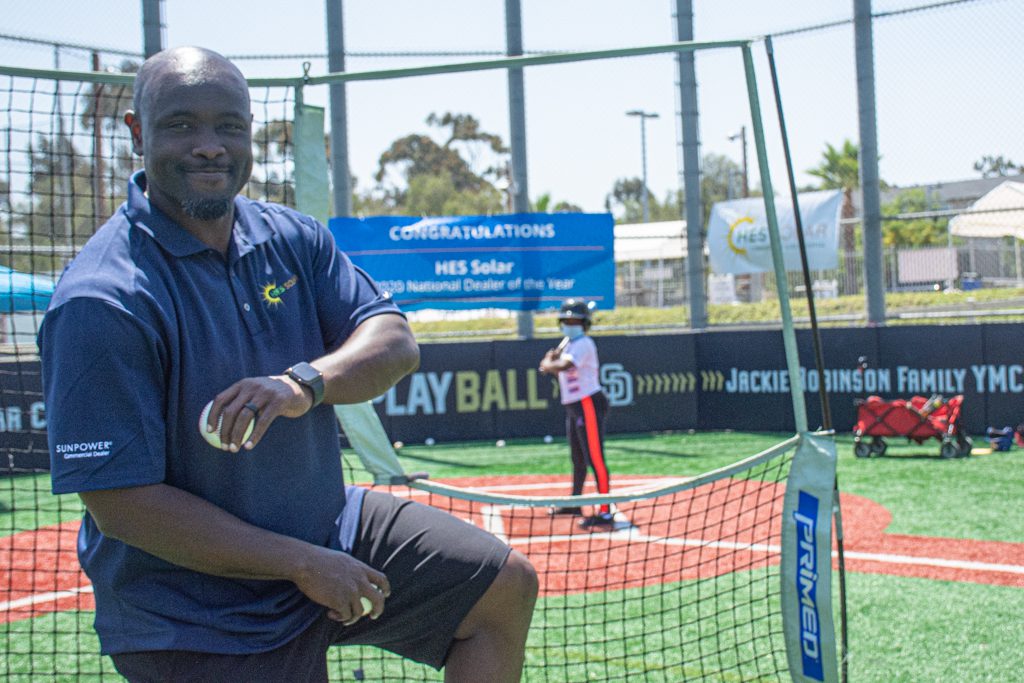 SAN DIEGO, Calif., July 9, 2021 – The YMCA of San Diego County hosted a Tony Gwynn Jr. batting technique clinic today at Jackie Robinson field as part of a $5000 check presentation from HES Solar to support the YMCA’s re-opening efforts in San Diego. Children enrolled in the day camp were surprised to find the former baseball pro on the Jackie Robinson YMCA field for the un-announced baseball skills session. Gwynn shared batting tips and helped the kids with their swing technique in two sessions that followed the corporate donation check presentation.

The HES Solar / YMCA of San Diego County partnership extends through to the end of the year to spread the word of the benefits of solar. It provides a method for Southern California residents who are considering going solar to enact a $500 donation from HES Solar for any HES Solar system installed and activated before December 31, 2021.

Tony Gwynn Jr. was a natural fit for the YMCA kids and the partnership kick-off. After a professional baseball career, Mr. Gwynn has been an HES Solar spokesperson for two years. HES Solar is also the official solar provider of the Padres Radio Network, where he covers the Padres with live game coverage as well as baseball commentary and discussion.

The partnership was a natural fit for the organizations as well; HES Solar has installed seven commercial-sized solar systems, incorporating both rooftop and carport arrays, on seven local YMCA facilities. The YMCA looks to save more than 20 million dollars over 20 years with these systems. The partnership will also include educational presentations and crafts as well as fun contests with great prize giveaways for children and adults alike in the San Diego area.

“The timing of this partnership for both HES Solar and the YMCA of San Diego County made this such a perfect fit,” said Brad Souza, Vice President of the Residential division of HES Solar, who presented the check to the YMCA. “I took over the Residential division at HES Solar in March of 2020, right when the lockdowns were put in place. It was tough, yet we were fortunate to be allowed to remain operational. We rebounded and today the division is stronger than ever. Now it’s the YMCA’s time to rebound, and I’m so glad this partnership allows us the opportunity to give some of our momentum to their full recovery.”

“We’re thrilled with this partnership, with our kick-off event, and really just with this unique way to help a great organization,” HES Solar CEO Ross Williams added. “Ending the lockdowns doesn’t automatically bring things back to normal; if we can be a boost to the Y we’re going to do it, and we’re going to give our solar customers a way to do it with us.”

“We are so grateful for committed partners like HES Solar that care about our local community,” said Courtney Cordero, Association Director of Annual Campaign for the YMCA of San Diego County. “It is partnerships like these that play a vital role in funding critical Y programs and scholarships. Today we are especially thankful for HES Solar organizing such an incredible event in one of our most vulnerable communities, and presenting a check that will help the YMCA of San Diego County continue the important work we do serving children, families and seniors.”

In celebration of its 20th anniversary as a local, family-owned solar installer, HES Solar initiated the program to support the YMCA of San Diego County’s re-opening efforts with the initial $5000 donation and the exciting way for solar customers to trigger additional donations. The partnership goal is to give more than $20,000 to the YMCA of San Diego County before the end of the year.

For today’s event at the Jackie Robinson YMCA, HES Solar had to keep this special partnership kick-off event under wraps, but going forward will announce partnership participation opportunities through the YMCA, though HESSolar.com, and through the two group’s social media channels. Home and building owners interested in supporting the YMCA of San Diego County while simultaneously going solar themselves can learn more about the partnership at hessolar.com/ymca.