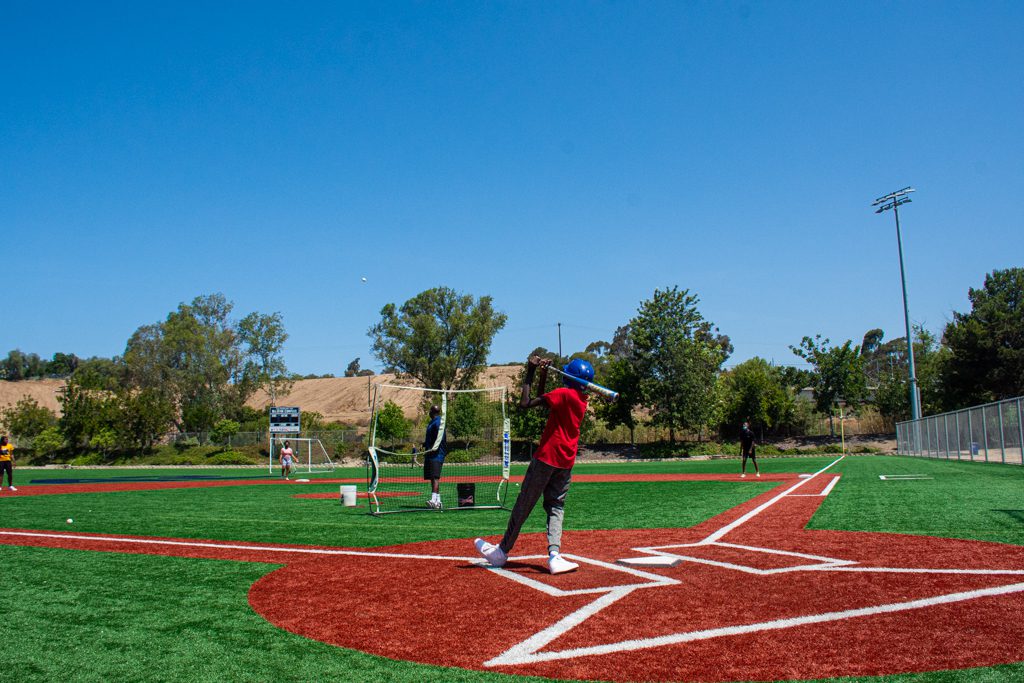 The San Diego baseball event with Tony Gwynn Jr. was fun for YMCA campers at the Jackie Robinson Family YMCA

Last week brought a surprise guest to the kids in camp at the YMCA: Tony Gwynn Jr. The baseball legend taught and played ball with campers at the Jackie Robinson Family YMCA with a baseball batting clinic given just before lunch. The event helped announce the 2021 partnership between the YMCA of San Diego County and HES Solar. These two groups have come together to promote renewable energy use (and cost savings) for San Diego homeowners and create a great way to boost the re-opening efforts of the YMCA of San Diego County.

The pandemic restrictions that required the YMCA to close its doors was a tough blow to the organization. They were forced to stop providing the services many San Diegans rely on, and the closures caused lost revenue and a drop in membership. The YMCA gym facilities are fantastic, but re-building membership as the restrictions are lifted is a monumental challenge. The HES Solar and YMCA of San Diego County partnership strives to smooth the Y’s transition back to their pre-pandemic levels of activity and participation. To learn more about the partnership and the history between HES Solar and the YMCA of San Diego County, please read this blog about the connection between the top solar company and the YMCA.

The pandemic shutdowns were tough for many companies. HES Solar was fortunate to be able to remain operational after some new safety protocols had been established. Then, as more San Diego employees worked from home, the benefits of rooftop solar came more clear to more Californians. Because HES Solar was already established as a top solar company in San Diego, solar panel installation was able to quickly recover and HES Solar’s residential solar division went on to have a very strong year. Into this current year HES Solar is seeing continued growth; its home solar division is stronger and larger than it’s ever been and the commercial solar division is running strong installing San Diego solar for businesses, multi-family residences, and other organizations and groups.

So when it was time for HES Solar to commemorate its 20th anniversary as a top solar panel installer in San Diego, it wanted to do something special for a group that hadn’t been able to remain open – and the current partnership was soon formed. HES Solar has created a way to share some of its solar business momentum to accelerate the YMCA’s reopening, beginning with a $5000 donation to the organization. But that’s just the start…

For anyone interested in helping but who may already have solar panels or is not in the market for a rooftop solar system (or a ground mount solar system or a home ‘solar battery’ storage system), HES Solar would love the help to spread the news about this partnership offer. HES Solar has a very generous HES Solar affiliate program; San Diegians interested in growing renewable energy use in California, saving friends and family members tens of thousands of dollars over the coming decades, and earring generous referral bonus money can sign up for our referral program and submit customers – just please be sure to tell us that you heard about our referral program through the YMCA Partnership.

And of course re-joining or joining the YMCA is another way to help the organization. This will also gain you access to the group’s great facilities, classes, and programs.

As for the kids already touched by the partnership? The batting clinic was a hit with the campers. Tony Gwynn Jr. taught two groups of kids with various levels of baseball experience. The kids were divided into two groups so Tony could give more time to each camper. After a short overview on the basics of the baseball swing technique, Tony pitched hardballs to the campers and coached them into some great hits. The kids waiting for their turn (and some of the HES Solar officers!) fielded the hits.

Tony threw a lot of pitches that day. Fortunately he didn’t have to call in a relief pitcher, and he didn’t get hit with any line drives. A few hits that might have taken him out of the game were fortunately blocked by the pitcher’s net that was set up before the linedrives started flying through the infield. Tony had a great time sharing his love of the sport with the next generation of athletes, and all the campers seemed to really enjoy taking tips and pitches from a Major League Baseball legend.