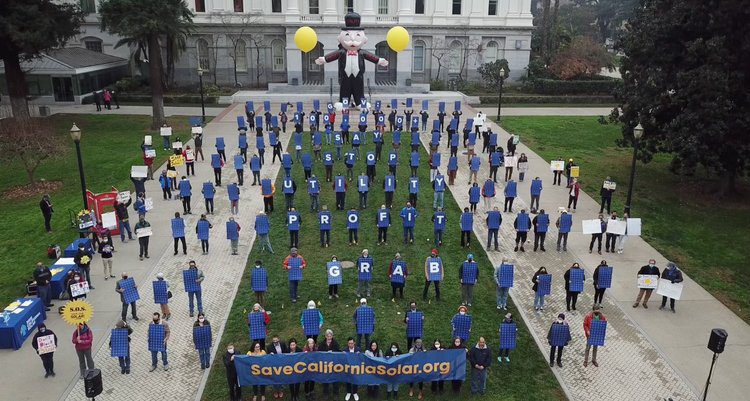 A coalition group supporting home solar installations and commercial solar installations delivered 120,000 public comments to the State Capitol yesterday. The pro-solar group sent a message to Governor Newsome via a human billboard in front of the Capitol building. The event comes during the week that the CPUC delivers its preliminary recommendations for NEM 3.0. The new tariff laws affect the ability of homeowners and business owners to participate in the benefits of solar ownership.

From the CALSSA (California Solar and Storage Association) press release:

Sacramento, CA—Hundreds of solar supporters, including consumers, affordable housing advocates, faith leaders, environmentalists, conservationists, and climate activists joined together for a rally at the California State Capitol building to deliver more than 120,000 public comments to the California Public Utilities Commission (CPUC) and Governor Gavin Newsom, calling on them to save rooftop solar and stop investor-owned utility proposals to make solar unaffordable in the state.

“This is where the rubber hits the road on blackouts, rising electricity bills and air pollution,” said Solar Rights Alliance Director Dave Rosenfeld, “The correct path is to help millions more working and middle class people get solar so we can keep up our progress and reject the utility profit grab that threatens to take us backwards.”

The groundswell of public support for solar comes ahead of an expected proposed decision in the coming days by the CPUC on the future of “net metering.” Net metering is the state policy that makes rooftop solar more affordable for consumers of all types by compensating them for the excess energy they produce and share with their neighbors and protecting them from discriminatory fees. Rooftop solar is growing fastest in working- and middle-class neighborhoods because of successful policies like net energy metering.

“The best way to ensure a cleaner and more affordable energy future for our communities is by generating our energy from solar panels on our homes, churches, small businesses, and schools,” said Green the Church Executive Director Pastor Ambrose Carroll, “We have a moral responsibility to future generations to expand rooftop solar access by preserving net metering for working families, not adding fees that only profit the big utilities.”

PG&E and other big utilities want to change the rules in their favor in order to eliminate a growing competitor, keep consumers stuck in utility monopolies, and maintain the need for costly and often dangerous transmission lines that are a key driver of utility profits and ratepayer costs. Proposals submitted by the utilities and other solar opponents would drastically reduce the credit solar consumers receive and add expensive monthly solar penalty fees to their energy bills.

“This is really a debate between energy democracy vs. energy monopoly. The big utilities want to protect their control over energy delivery to protect their billions in profit,” said Environmental Justice Coalition for Water Executive Director Esperanza Vielma, “The environmental justice community wants energy equity where people are free to generate and distribute energy their own energy in ways that are cleaner and more affordable.”

If utilities get their way, solar will become unaffordable for most consumers, costing thousands of solar jobs, making California more vulnerable to fires and blackouts, and derailing California’s clean energy progress needed to fight climate change. By making the transition to clean energy slower and more expensive, the utility profit grab would cost the state tens of billions over time and each ratepayer $295 a year.

“California risks losing more than 50,000 jobs and 1,500 small businesses if the state turns the lights out on rooftop solar,” said Bernadette Del Chiaro, Executive Director of the California Solar & Storage Association. “Governor Newsom and the CPUC should not reward big utilities like PG&E while at the same time killing jobs, hurting regular consumers, and derailing California’s climate change efforts. We need to keep California a solar state.”

“Rooftop solar needs to continue to grow quickly for California to reach its clean energy goals,” said Laura Deehan, State Director at Environment California Research & Policy Center. “Governor Newsom has the golden opportunity to help California reach its climate goals, keep the lights on and protect our state’s precious open spaces. Over 120,000 Californians agree: Governor Newsom needs to stand up to the state’s investor-owned utilities and keep rooftop solar within reach for California families and businesses.”

To date more than 600 diverse organizations endorsed protecting net metering and championing rooftop solar, making the Save California Solar coalition one of the largest in the state’s history of clean energy battles underscoring the inflection point in California as the state struggles to maintain its leadership against a still powerful fossil fuel lobby.

“To ensure the transition to a clean energy economy benefits our communities, we need net energy metering in combination with strong energy policies that allow decision-making and ownership of energy resources to stay in the community rather than in remote corporate boardrooms,” said People Power Solar Cooperative Co-Founder and CEO Crystal Huang, “Limitations to net energy metering will hurt our ability to create opportunities for our communities to share wealth and activate the transition to a regenerative energy economy.”

“The CADEM Renters Council calls on Governor Newsom to make rooftop solar more affordable for millions of working and middle class people, and reject proposals to make it less affordable,” said Monica Madrid of the CA Dem Renters Caucus, “No one should have to choose between paying their rent and paying their utility bills.”

Learn more and get involved. Solar is a great way to control and reduce energy costs for California residents and businesses. Go to SaveCaliforniaSolar.org to learn more.