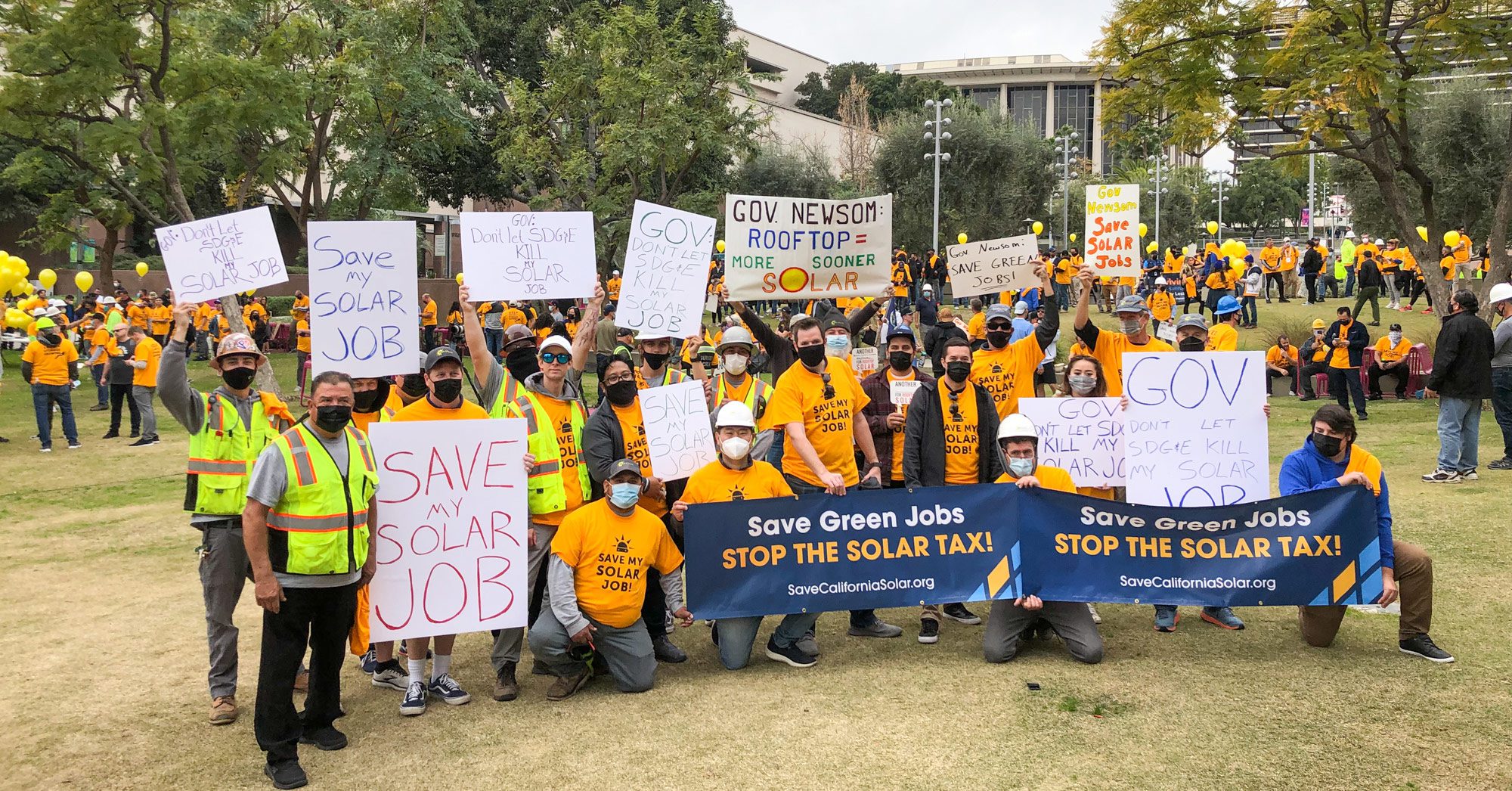 Solar workers and advocates took part in the largest solar demonstration in American history on January 13th, 2022. The event was held in two locations simultaneously. Together the Los Angeles and San Francisco rallies drew over 3,000 people who marched against restrictions that would destroy private solar growth, dozens of small businesses, and over 50,000 solar jobs in California.

The rally’s power has already shown signs that it is helping save California solar. It has just been indicated that the final decision on NEM 3.0 has been postponed from its original January 27th meeting date. The earliest that NEM 3.0 could be finalized is now February 10th, 2022… but January 27 still holds a large impact on the future of solar – and one you can help move in the right direction. Read on…

We need everyone’s help to tell Governor Gavin Newsome as well as the California Public Utilities Commission (CPUC) that you won’t let them kill solar. Tell them that the power of the sun belongs to the people, not the utilities and unions that want to strangle small businesses in order to grow their energy monopoly.

How You Will Save Solar

Send a public comment to the CPUC. Tell them not to let NEM 3.0 destroy private solar.

Tell Governor Newsome’s office not to allow the utility profit grab of solar. Tell him not to kill the private solar industry.

His office email is https://govapps.gov.ca.gov/gov40mail

Tell the CPUC directly that you oppose the December 2021 proposed language for NEM 3.0 and you want them to keep private solar viable in California, the leading clean energy state. They can be emailed at public.advisor@cpuc.ca.gov.

The California Public Utilities Commission implemented Net Energy Metering in 1996 to incentivize homeowners to invest in solar. After that, agreement required the utilities to purchase excess electricity. Therefore, solar systems could produce ‘extra’ energy to offset the home’s evening electricity use.

Homeowners with the original Net Energy Metering tariffs (now nicknamed NEM 1) had a 1:1 purchase:sale price ratio. Additionally, they were (and are) on billing plans that keep energy value consistent throughout the day and night.

In 2016 California amended the rules and NEM 2.0 was born. NEM 2.0 required Time of Use billing which lowers electricity value during solar’s production times. NEM 2.0 is less advantageous but the investment proposition of home solar is still outstanding.

As of mid-January, California still operates under NEM 2.0. New solar installations qualify for NEM 2.0. However, this is soon to change…

In mid December of 2021 the California Public Utilities Commission released their proposed language for the soon-to-be-regulations of NEM 3.0. The initial plans show a lack of understanding of the value of private solar ownership, a misinterpretation of the actual data, and an unfair influence of the unions and utilities. Those other groups want to thwart private solar ownership in lieu of massive solar farms they would like to continue to build in the California desert.

HES Solar was proud to attend the 2022 Southern California rally in downtown Los Angeles. HES Solar was selected to hold the leading banner at the front of the crowd. This honor was thanks in part to the San Diego solar installer’s continuous efforts to protect solar in California. The rally itself was one of those efforts. All available HES Solar staff and crew members attended. However, some employees had to stay in San Diego to install current rooftop and ground mount solar projects. You can’t save solar unless you install solar! Company President Ross Williams closed the office and helped coordinate travel 80+ miles to represent at the rally.

Many other San Diego solar companies also attended the rally. It was a coming together of an entire industry. 50,000 jobs hang in the balance based on decisions that could be finalized in just a few weeks. For solar, the stakes could not be higher. The fight is to save renewable energy, small businesses, and private sector jobs. HES Solar asks for all Californians to get involved in the fight to help save solar.

HES Solar’s President and owner Ross Williams was right there on the front lines. He gave his thoughts on NEM 3.0 and on the importance of addressing what could be a devastating blow to the state. Additionally, many states and regions follow what happens in California. If NEM 3.0 destroys solar, it could mean a loss of energy freedom for all of America as well as citizens in other countries.

“Frankly, it will destroy our industry and I think the scariest part is the way it’s being branded. They are making it seem, ‘they’ being the utilities, our ultimate competitor, they’re making it seem like we are cost shifting and stealing from the less fortunate. And that’s just not any way, shape, or form what we’re doing. This solar movement actually is the opposite of that. It helps those people, it actually reduces costs on the grid. The utilities unfortunately don’t see it that way.” – Ross Williams, HES Solar President

“California’s been on the front lines of the solar movement, really globally. And something like this [NEM 3.0] would just be a huge step backwards and really a waste of all the investment that the state has put into this industry, and that individual business owners and homeowners have put into this industry.” – Ross Williams, HES Solar President

“We want the CPUC to reject this proposed decision they’ve come out with and come up with a new solution that will work and keep our jobs and our industry sustained.” – Ross Williams, HES Solar President

Speakers addressed the crowd, then the solar workers and advocates took to the street. It was a very happy and very enthusiastic crowd. Cars and buses honked in support of the effort to save California solar. The marchers stopped at the crosswalks and kept to the sidewalks. It may have broken up the long line of supporters, but it also demonstrated the style and class of the group.

Former California Governor Arnold Schwarzenegger didn’t actually say “Come with me if you want solar to live,” (as far as we know). However he did recently publish an Op-ed in the New York Times. In it, Schwarzenegger states, “When I was California’s governor, we set a goal in 2006 of putting solar panels on one million roofs across the state. Skeptics said it couldn’t be done, but with bipartisan support in the State Legislature, California met its goal in 2019.”

After that, Schwarzenegger pointed out that of the 1.3 million solar systems on rooftops in California, roughly two thirds of those are on private homes or business buildings. The others are attributed to government buildings.

He spoke out against the current, anti-private solar of the CPUC’s proposed language. Schwarzenegger clarified what the changes really amount to, “…let’s call it what it is: a solar tax.” He addressed the contention that solar currently has a negative impact on low income households. He wrote in favor of private solar, “…adding a tax and removing incentives will hurt the solar market, and making solar more expensive for everyone does nothing to help our most vulnerable.”

Join in and help sway solar’s future in the right direction. Please use the action ideas methods given earlier in the story. Tell our elected as well as our appointed representatives that solar should be left in the hands of Californians. (The five members of the CPUC panel who will decide this are appointed). Save the small businesses that have built the incredible solar capabilities California has today.

PrevPreviousIf It’s Right for California Are You Asking, “Should I get a home battery?”
NextHES Solar deploys a BYD Energy Storage System with Energy Toolbase’s Acumen EMS™ Controls Software for Fortune 100 ClientNext